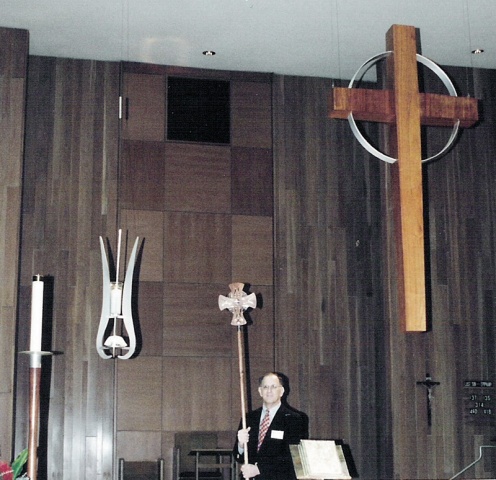 My design projects for St. Luke's Episcopal Church, Dallas began with the design of wearable anniversary cross jewelry. The graphic design was later adopted for church logo use and led to a commission for me to make a processional cross.

When first designing the anniversary jewelry, I had much prayerful input from the anniversary committee. We approached the design possibilities from the name of the church, symbols that tell the story of who they are as a congregation, and architectural aspects of the church. The design is mainly based upon symbols telling who they are, but I used one prominent design element from the church, the pyx, which hangs from the ceiling holding the reserved sacrament. The design of the pyx suggest the flames of the Holy Spirit. The church is built in a circular shape with the altar railing in the round, and reflected in many other church fixtures and furnishings. The roundish shape of my cross design reflects that recurring architectural theme. When designing the processional cross, I used the wood and white metal theme which also echos throughout their architecture.