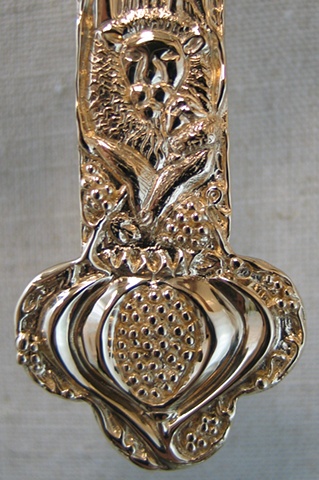 THE LION AND LAMB The familiar lion and lamb imagery has developed from a combination of biblical verses from Isaiah to symbolically convey a message of peace. The verses paint a picture of ferocious beasts (like the lion) feeding and lying with gentle animals (like the lamb). The depiction in the cross with a lion and lamb lying together at the feet of the Good Shepherd reminds us that peace and unity is available to us through our Great Mediator.

BURSTING POMEGRANATE Because the thick, hard skin of a pomegranate bursts open exposing the juicy seeds, it became a symbol of the fullness of the suffering, resurrection, and power of our Lord, who burst forth alive from the tomb.

For more than 5,000 years, pomegranates have symbolized fruitfulness because of the numerous seeds in the fruit. It is one of the seven species brought back to Moses as proof of abundance in the land. It also represents the Church and unity, illustrated by the many seeds bound together in a single skin, suggesting the unity and oneness in Christ of the many believers. Its staining, deep blood red juice color has led to its use as a symbol of martyrs.

The pomegranate's crown-like terminal atop an orb has made it a symbol of royalty, and is often referred to as "the crowned fruit". It is said that Solomon designed his coronet based on the pomegranate's crown. In Christian symbolism, crowns remind us that Christ is King, and that crowns await all faithful Christians. "Blessed is the man who endures trial, for when he has stood the test he will receive the crown of life which God has promised to those who love him." James 1:12