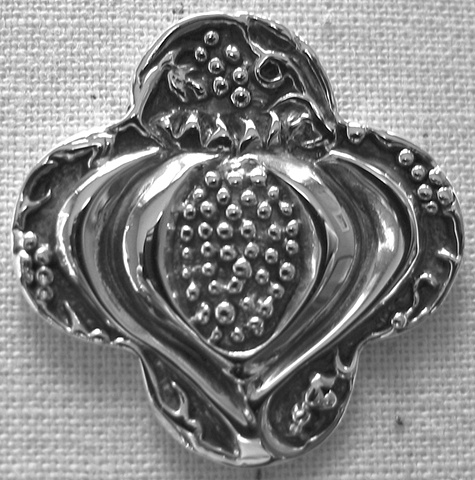 QUATREFOIL WITH BURSTING POMEGRANATE
< previous next >

BURSTING POMEGRANATE Because the thick, hard skin of a pomegranate bursts open exposing the juicy seeds, it became a symbol of the fullness of the suffering, resurrection, and power of our Lord, who burst forth alive from the tomb. For more than 5,000 years, pomegranates have symbolized fruitfulness because of the numerous seeds in the fruit. It is one of the seven species brought back to Moses as proof of abundance in the land. It also represents the Church and unity, illustrated by the many seeds bound together in a single skin, suggesting the unity and oneness in Christ of the many believers. Its staining, deep blood red juice color has led to its use as a symbol of martyrs.

CHRIST THE TRUE VINE The grapevine border represents Christ who tells us in John 15, "I am the true vine, and My Father is the vinedresser...I am the vine, you are the branches." In referring to Himself as the stem that sustains the branches, and his Father as the vinedresser, He was using a metaphor that was well understood, since grape growing was widely practiced in the Holy Land. He describes how the vinedresser prunes so that it will bear more fruit and how a branch thrives in its connection with the stem and root system.

QUATREFOIL The Quatrefoil is a suggestive cross form. In historic Christianity, the four lobes of the quatrefoil represent the four gospel evangelists and the four compass directions, serving as a symbol of the spread of the gospel to the ends of the earth. Four equal foils represent equal proportion, balance, harmony, and wholeness. It doesn't protrude or intrude. It fills and includes. Having no sharp external edges, it can remind us that somehow, our faith walk and that of others must co-exist compatibly, to proclaim the truths of our own tradition without hard edges or harsh boundaries.

Bishop Doyle carries this as a pocket cross.